With the new Windows 10 2004 update I´ve been suffering the bug from the new ScreenSketch tool that comes by default with this new version of Windows 10.

I´ve been always using the combination of ctrl+shift+s to take screenshots of my PC to easily select small parts of my desktop. This is very usefull to do quick edits specially when working with markdown…But after the windows upgrade, anytime I was trying the combination, I was receiving this error: 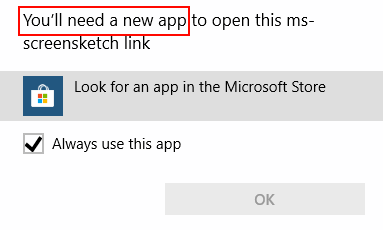 My fix was basically to force the OneNote 2016 screen clipping again, by uninstalling the “new” screensketch :).

Since ScreenSketch tool is installed by default with Windows 10, you are forced to uninstall it manually through PowerShell.

Now that you basically uninstalled the buggy tool, you can edit the shortcut key combination for OneNote 2016 (which is free) and start using it as always:

Open RegEdit.exe and edit this key:

And use any combination you want: http://www.kbdedit.com/manual/low_level_vk_list.html

NOTE: Please, take a look on this post because may be you are more lucky than me :)

A possible workaround to avoid uninstalling ScreenSketch was to force a reinstall of the tool…which at some point will recreate the protocol handler.

NOTE: By the time this post has been written, this option didn´t work